Guangsheng Temple is famous for its "Three Musts of Guangsheng" and is the same ancient temple listed in the first batch of key cultural relics in the same year as the Palace Museum. Guangsheng Temple was founded in the first year of the Eastern Han Dynasty (147). The Feihong Pagoda , "Zhaocheng Golden Treasure", and Yuan Dynasty murals of the Water Temple are also called "Guangsheng Sanjue". Feihong Pagoda is one of the five Buddha stupa pagodas and four ancient pagodas in China. It is also the only largest and most complete glazed pagoda found by a craftsman. "Zhaocheng Golden Treasure" is the format of the first woodcut version of the Tibetan Buddhist scripture "Open Treasure" in the Song Dynasty. This Tibetan scripture is a rare translation of the Sanskrit scripture retrieved from Tianzhu by three Tibetan masters Xuan Zang from the Tang Dynasty. It is therefore regarded as a rare treasure, and it is also known as the treasure of the four major town halls of the National Library, together with "Yongle Grand Ceremony", "Shu Kushu Shu" and "Dunhuang Testament". The Mural of the Water Temple is "the only isolated mural in ancient China that did not contain Buddhism and Taoism." One of the Yuan Dynasty drama murals, "The Daxing Sanle Zhongdu Show is here" is the only large-scale Yuan found in China. Modern drama murals are rare materials for studying the history of drama development and stage art in China. Coming to Guangsheng Temple today is not only a prayer ceremony, but also a journey of cultivating traditional Chinese culture, which attracts tourists from all directions.

Guangsheng Temple is located in Hongdong County, Shanxi Province. It consists of three temples : the upper temple, the lower temple, and the water temple . The main buildings in the upper temple are Shanmen, Feihong Pagoda , Miduo Hall , Daxiong Baodian , Tianzhong Tiandian, Guanyin Hall, Jizo Hall, and chambers, corridors, etc .; the lower temple has Shanmen, front hall , rear hall , duo hall and other buildings . The water temple includes buildings such as the Shanmen (Yuan Dynasty Stage), Yimen, and the Mingying King's Hall . In the Mingying King's Hall , in addition to the clay sculptures of the King Mingying, maids, and ministers, the walls of the hall are painted with various paintings. Yuan Dynasty Murals . In addition, as early as more than 800 years ago, the temple supported a copy of the "Zhaocheng Golden Tibetan", which is now the basis of the "Chinese Tripitaka", which has a high artistic and cultural value.

Summer is the best time to travel.

Satellite map of Guangsheng Temple from your location

Know the latest weather forecast for the location of Guangsheng Temple in Shanxi> Linfen> Hongdong in advance, prepare for the perfect trip, and welcome a happy journey
Release time: 2020-01-25 18:00 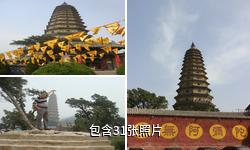