Phuket Island, Thailand is known as "a pearl on the Andaman Sea" and is rich in natural resources. It is known as "Treasure Island" and "Treasure Island". It is both Thailand's largest island and the smallest province in Thailand. The only island in Thailand that has been classified as a provincial level is here, and it is now the world's main tourist destination.
Phuket is located on the Andaman Sea off the west coast of the Malay Peninsula in southern Thailand. It has a profound history and culture. Since ancient times, some aboriginal tribes have lived here. The coast was once occupied by a tribe grazing on the coast, known as "Chao Nam" or "Gypsy at sea". They never stop migrating, during which they will temporarily settle on the islands, but they never cultivate or cultivate on fertile islands. They only rely on being pirates and collecting shellfish to obtain pearls to maintain their lives. They do n’t even have any words, no religion, and they are considered by the world to be extremely primitive and barbaric.
Phuket is famous for its pure white fine sand and lime reefs. Since Thailand itself is not threatened by typhoons and huge waves, this place in Phuket is even more windy and sunny. In addition, the area is not very large and the periphery is more There are more than a dozen islands, each of which is unique and beautiful. The west coast of the island is directly opposite the Andaman Sea. There are pristine white sand beaches, each with its own advantages and charm. White beaches, strangely shaped lime reefs, and jungle-filled hills attract each year. A large number of tourists came to visit.

Phuket is 867 kilometers from the capital Bangkok, covering an area of 543 square kilometers. It is longer from north to south and slightly narrower from east to west. It is surrounded by 39 small islands and is a representative tourist resort in Southeast Asia. The island is full of beaches and bays, including Kamala Beach , known for its cleanliness, Surin Beach , a private style, coral islands that often hold sea sports, and Patong Beach , which has a rich nightlife. There are also many mountains on the island, and tourists can take taxis and motor adventures on the island, as well as dive and yacht out to sea. There are pineapple fields and rubber gardens open to tourists in the north; in addition, tourists can also see European-style home buildings in the city.

The Seafood Festival, held every May, aims to promote Phuket's delicious seafood and attract tourists during the rainy season. Activities include seawater tourism resource exhibitions, seafood sales booths, regional cooking exhibitions and cultural exhibitions.
The Super Thunder Gypsy Festival is held every year in June and November of the old calendar in Phuket. Similar to the Water Lantern Festival, the boat is put into the water and drifted away at night in order to drive away bad luck and pray for good luck. Before putting the boat into the water, cut a small piece of nails and hair together with a small doll made of wood. After that, villagers will perform famous dances around their boats.
Patong Beach Carnival, held every November 1st, is a crazy and lively festival full of art. There are Thailand's best jazz band performances, shemale shows, bartending skills shows, magic shows and more. Many colorful and interesting activities will also be organized, including morning blessings, water sports competitions, tourist beauty contests and more. You can also get access to local artwork in Phuket.

11 to April of each year

Phuket's airport has weekly flights from Shanghai (at least three times a week), Hong Kong, Taipei, Singapore, Malaysia, Japan, and all parts of Europe. Beijing, Guangzhou, Wuhan also open flights to Phuket . You can also transfer from Bangkok to Phuket. Thai Airways operates more than a dozen flights daily from morning to night to Bangkok and Phuket. There is a mini bus at the airport that costs 120 baht per person to reach Phuket Town. It costs 180 baht to Patong, Kata or Karon Beach. Or take a taxi. The taxi from the airport to Phuket Town costs 500 baht and the beach costs 700-800 baht. Pick-up service is usually available at luxury hotels.
The journey from Bangkok to Phuket is approximately 900 kilometers and takes about 12 hours. There are several daily departures at Phuket's South Bus Terminal to Phuket. The end point is the Phang Nga Rd bus station in downtown Phuket. Standard buses operate multiple times a day, with the frequencies: 7:00, 9:30, 17:00, 17:30, 17:45, 18:00, 18:30, 18:40, 19:00, 19:10, 20 0:00 Air-conditioned cars are usually night shifts, three shifts per day: 17:30, 18:00, 18:30.

1.Because of the laws and regulations, and the Thai temples set off firecrackers from time to time, only Phuket in the country became the only exception. Due to the large number of Chinese immigrants, the firecrackers during the Chinese New Year are only heard in Phuket. Chalong Temple is also one of the temples that allows locals to cast firecrackers.

Get the latest weather forecast for Phuket in advance, make perfect preparations for a pleasant journey ^-^ 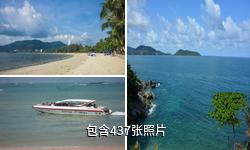 Contains 437 photos
Donkey Friends Raiders
我去过1888 I want to go to 4933 I have been to 1888
WeChat scan code subscription, won 9000 attractions at home and abroad